in the area of Taranto

Details
in the area of Taranto 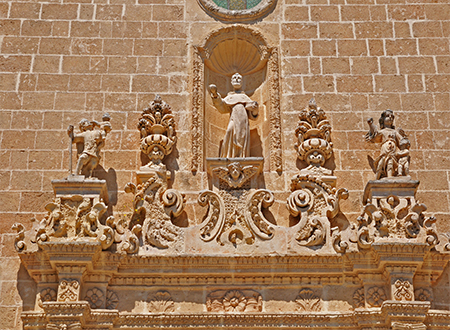 The church of St. Leonhard dates back to 1702, after which the two chapels dedicated to the Madonna of Constantinople dating from 1621, where the homonymous congregation was exercised, were cut down. Since 1710 the altar was decorated with stucco and the church was equipped with an organ and two bells, of which there are only one today.

In Naples, however, the statue of the Holy Owner was commissioned, which is located in the center of the main altar. On August 19, 1776, Ferdinand IV of Bourbon granted the Royal Consent to the canonical erection of the confraternity, which subsequently received from Pope Pius VI the opportunity to celebrate the recurrence of the Holy Transit on 6 November, in conjunction with the festivities that they are held in the Diocese of Limouges in France where he died. St. Leonard is remembered in the liturgy as a protector of prisoners, prisoners and slaves: for this reason, the church is embellished by a splendid painting depicting this saint who invokes the Madonna of Constantinople and s. John the Evangelist. The painting was made in 1781 by Vincenzo Filotico (Manduria 1748 - 1834), and the work shows a generic classical culture.

The compositional equilibrium develops along the diagonal that, from the imploring figures, in the lower right, rises to the opposite corner in the direction of the Virgin. After the earthquake of 1743, Manduria, who had heard the earthquake, did not suffer any serious harm as in other parts of Salento; and this was attributed to the intercession of the Immaculate Virgin. For this reason, the congregation of St. Leonardo decided to honor the Immaculate Virgin under the title of Madonna of the Earthquake that was celebrated every 21 February.

St. Leonard's Church is open to the public only on November 6, when Saint's celebrations take place.

Details
in the area of Taranto 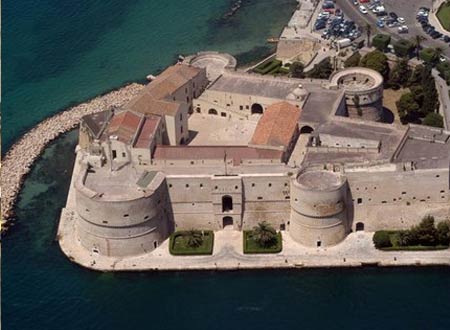 Open daily, including holidays, to free guided tours of Castel Sant 'Angelo in Taranto, better known as the Aragonese castle, is an experience not to be missed in Puglia. Positioned to 'entrance of the access channel of the city of Taranto, in the castle, well preserved and heritage of the Navy, are visible to the testimonies of all peoples that have characterized the history of this land: the Greeks, Byzantines, Normans, Swabians and Angevins . Rebuilt for wish of the king of Naples, Ferdinand d 'Aragon, between 1487 and 1492, to adapt it to new military techniques of defense, the castle is characterized by cylindrical towers and walkways inside where it's exciting to see the different historical sites. It will be interesting to visit the chapel
Read More Comment (137) Hits: 2519
0
0
0
s2sdefault
powered by social2s