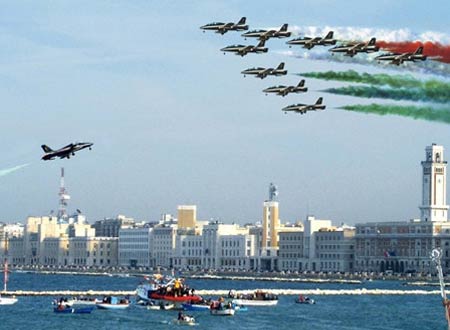 The event to be held Friday, May 8th in Bari is undoubtedly one of the most anticipated of Puglia. All with the nose to admire one of the most exciting riders given by the Italian Air Force, which makes a stop in Bari every two years.

Arrows tricolor were born in 1961 following the decision of the Air Force to create a permanent group for communal aerial acrobatics training of its pilots. With ten aircraft, including nine in training and one solo, they are the most numerous aerobatic team in the world, and their flight program includes twenty stunts lasting about half an hour.

The livery of the MB-339PAN used by the Group is given by the characteristic tricolor band that runs through the side of the plane on a blue background. The abdomen of the airplane is light gray while the numbers of training are the yellow stickers. The classic Aermacchi MB-339 A under the Italian Air Force have been taken off the tanks of wingtips. It is designed so the cans underwing mixed, containing both the vaseline oil for the smoke signals that a certain amount of fuel to partly compensate for the reduction of autonomy caused by the removal of "tanks tip" end.

The colored smoke is generated for dispersion, and is composed of Vaseline oil to which pigments are added non-polluting. The release of such a compound is through a tube placed in the exhaust rear of the airplane. E 'already possible to see one of these beautiful specimens in Bari on the waterfront Nazario Sauro!

The love arrows flag, in honor of the feast of St. Nicholas will greet the city of Bari!

People in this conversation